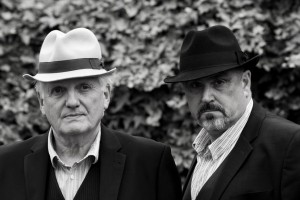 Our Day In The Sun(SAB5) is the title song of our new CD, currently available in promo form for distribution to radio stations and reviewers, and in News from Nowhere, Bold St Liverpool, Quicksilver Music, Market Street, Southport  and Formby Books, The Cloister, Halsall Lane, Formby, at the Promotional price of £5. All new original songs penned by Barry the CD contains songs written and recorded over the last two years since Living The Dream(SAB4) and includes San Vito 1970 and The Ballad of George and Maude, Barry’s entries to The Liverpool Acoustic Songwriting Challenge, performed at the finals night at The View Two Gallery, Mathew Street, Liverpool by Barry and Ronnie in 2012 and 2013 respectively. Both songs are featured in videos and Soundcloud on the music/video page, along with a solo version of the opening track of the album, My Irish Home/Formby Shore. We’re delighted with the way the CD has turned out and it features songs which are rapidly becoming the mainstay of our current live act, the most un-lullaby like lullaby, Silver Thread and the mysterious Lone Crow as well as the light-hearted profanity packed morality tale about the perils of swearing, Hide The Sausage. We’ll have advance copies at gigs if you’re interested come and have a word with us. Or order direct from this website at £5.50 including p and p.